There is evidence that the pepper corn has been in use for at least 4,000 years, possibly longer, as a condiment or seasoning agent in cuisine and as a medicine. Once it was referred to as black gold. For centuries it was offered as currency. Its ubiquity in modern life belies the fact that in our recent history it was a scarce and much prized trade item, enjoyed by the wealthy and an aspirational item for the less fortunate. Its value soared in Europe as warring, banditry and anarchy afflicted its overland trade routes, from southern India , which had existed since before the rise of Rome. Bartolomeu Diaz’s rounding of the Cape in 1488 opened up the spice trade and the wooden ships had greater carrying capacity than four legged caravans. The return journey around the tip of Africa of roughly 17,000 kilometers by sea was very dangerous and could take years. The result was that pepper was a rarity which sold for extremely high prices.

A pepper mill or grinder is one of the 19,000 artefacts recovered from HMS Mary Rose, Henry the VIII’s flagship which was sunk by a French cannonball during the Battle of the Solent. It was discovered after 437 years submerged in the English Channel when the ship was raised in 1982. Almost intact, only the metal grinding plates had rusted away. Fashioned from very hard Ash wood it still contained pepper corns and, miraculously, scientists could smell their characteristic aroma when it was opened up. Consisting of three parts, the ground pepper fell into a collecting cup which comprised the bottom part of the grinder. In Tudor times (1485 – 1603) it was a premium item and was found in a chest belonging to an officer. 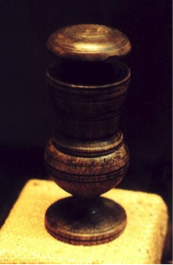 Discerning users have always known that pepper is much more flavorful and intense when freshly ground. Like coffee, pepper corns begin to lose these important characteristics soon after having been milled. Within three months it shows a very marked difference in quality. Consider the implications of that when purchasing pepper from a store. It may have been packed on the shelf in the past weeks, and chances are the pepper corns used were ground and packed several months ago. The pepper you sprinkle onto your food has therefore likely degraded for an extended period.

During more than twenty years Global Grinders PTY Ltd, has brought aesthetically and functionally superior grinders, of the highest quality specifications into markets around the world.

The Classic Grinder (pictured below), whose appearance is designed to enhance the dining experience in the home and on restaurant tables, is one such example. The Classic grinder effortlessly grinds pepper corns and all forms of salt and is one of the more than 22 grinders in Global Grinders’ extensive range. 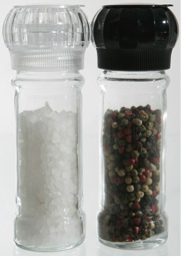 Today, pepper and salt grinders are affordable and available to all (unlike in Henry the VIII’s era).

For ‘a perfect grind every time’ please Click here to email us.

We look forward to hearing from you and meeting your grinder requirements.