One of the most ubiquitous whole spices used in spice grinders all over the world is without a doubt the humble peppercorn. This spice can be found in almost every part of the world, and is used in almost every global cuisine. While black pepper is the best known of all the peppercorn varieties, there are also other varieties that can add plenty of flavour, aroma and complexity to dishes. 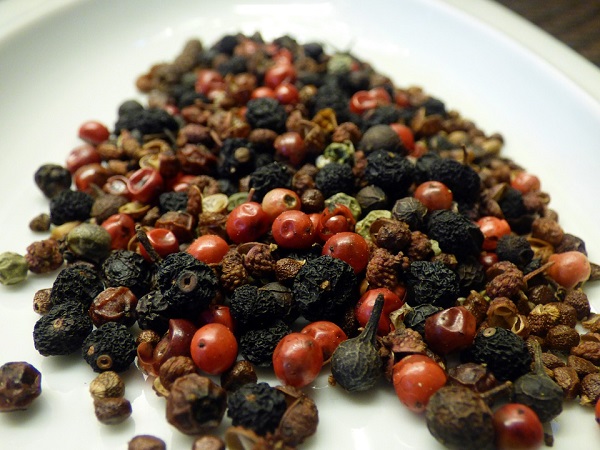 It is important to note that until you have tasted freshly ground pepper milled directly onto food, you cannot truly appreciate the taste of this heady spice. Equal parts pungent, rich and sharp, the taste and smell is distinctive, working well over a simple piece of avocado toast, perfectly brewed cup of chai or an elaborate five-star dish worthy of MasterChef. Already ground pepper is very different to freshly ground, with much of the flavour and freshness lost within 30 days of the spice being ground. As peppercorns are ground whole, the flavour is protected inside the outer shell of the dried berry. The grinding mechanism of a spice grinder breaks through this shell, releasing the flavour inside.

The scent of whole peppercorns does however reveal a hint of the flavour to come. If you visit a spice market, and compare different peppercorn varieties, you will soon notice this subtle difference in aroma.

Which Peppercorns Should You Have in Your Pepper Grinders?

As each kind offers its own distinct flavour, you may find that it’s handy to have a few different kinds of peppercorn. Stocking up on a few good quality spice grinders is the best way to grow your spice collection and enjoy delicious, fresh, whole spices for every meal.

All pepper comes from the same plant – Piper nigrum. Varieties differ according to when the berries are picked, and how they are processed to achieve the final colour and flavour.

Each peppercorn has its own place in your spice grinder, as you can see! Try them all, and you will soon begin to enjoy the versatility and taste that freshly ground peppercorns add to your meals.